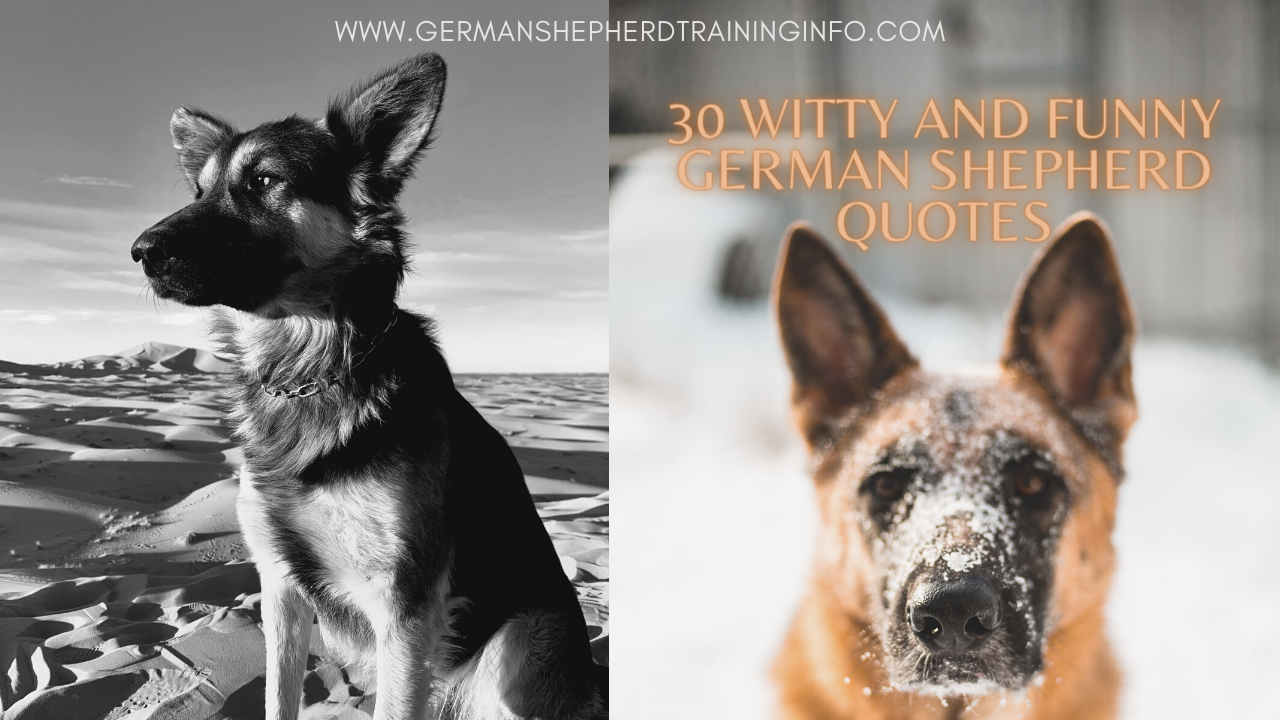 Words knit together to procreate a sense of undeniable cohesion within an individual’s essence and psyche. We often are left less with terms and more with feelings, which is comparatively tricky to express. In a situation like that, we are assisted by quotes in projecting the appropriate sentiments.

It’s another fine day. You are goofing around with your German Shephard. And suddenly, it seems like a good time to throw a dog comedy in between the scene. Your instinct says it’s an excellent time to follow it with a photograph. A moment like so may not be rare with your canine sidekick but definitely is worth documenting and sharing. But the dilemma remains, which caption or quote can define his or her wiggling of the tail, or the assertive posses, or the insta ready boomerang.

If it’s any consolation, I go through the same struggle. My German Shephard, Tyson, is a forever divo, resulting in my social media handles filled with his stories, pictures, and photographs. I am always on a hunt for funny German Shepherd quotes. So, I decided to bring you 20 German Shephard quotes so that you have to look no more.

German Shepherds only shed twice per year: January to June and then again July to December. (Unknown)

Money can buy you a fine dog but only love can make him wag his tail. (Kinky Friedman)

When an eighty-five-pound mammal licks your tears away, then tries to sit on your lap, it’s hard to feel sad. (Kristan Higgins)

My German Shepherd knows 10 different commands and sits when she’s told to. You can’t manage to put the seat down after you’ve gone to pee. Go figure. (Unknown)

Dogs do speak but only to those who know how to listen. (Orhan Pamuk)

I was thinking of getting a German Shepherd once, but I didn’t want to learn another language just to have a dog. (Unknown)

The world would be a nicer place if everyone had the ability to love as unconditionally as a dog. (M.K. Clinton)

No one appreciates the very special genius of your conversation as a dog does. (Christopher Morley)

Dogs love their friends and bite their enemies, quite unlike people, who are incapable of pure love and always have to mix love and hate. (Sigmund Freud)

If you think dogs can’t count, try putting three dog biscuits in your pocket and then giving Fido only two of them. (Phil Pastoret)

I feel sorry for people who don’t have dogs. I hear they have to pick up food they drop on the floor. (Unknown)

A dog can snap you out of any kind of bad mood that you’re in faster than you can think of. (Jill Abramson)

Dogs feel very strongly that they should always go with you in the car, in case the need should arise for them to bark violently at nothing, right in your ear. (Dave Barry)

What did the dog say after walking in the desert for hours? If I don’t find a tree soon I’m gonna pee on myself. (Unknown)

I don’t want to adult today, I just want to dog. I’ll be lying down on the floor in the sun, you can pet me and bring me some snacks. (Unknown)

Dogs are our link to paradise. They don’t know evil or jealousy or discontent. To sit with a dog on a hillside on a glorious afternoon is to be back in Eden, where doing nothing was not boring–it was peace. (Milan Kundera)

READ :   5 Common Leg Problems in German Shepherds Every Dog Parent Must Be Aware Of

If you want to avoid your German Shepherd from barking at night, keep your four-legged buddy inside the house with you at night. (Unknown)

My German Shepherd can run 40 yards in 4 seconds. Want to try your luck? (Unknown)

Outside of a dog, a book is man’s best friend. Inside of a dog it’s too dark to read. (Unknown)

How was the dog’s day? Ruff. (Unknown)

Did you ever notice that when you blow in a dog’s face he gets mad at you? But when you take him in a car, he sticks his head out the window. (Steve Bluestone)

Ever consider what our dogs must think of us? I mean, here we come back from a grocery store with the most amazing haul, chicken, pork, half a cow. They must think we’re the greatest hunters on earth! (Anne Tyler)

The great pleasure of a dog is that you may make a fool of yourself with him and not only will he not scold you, but he will make a fool of himself too. (Samuel Butler)

It’s just the most amazing thing to love a dog, isn’t it? It makes our relationships with people seem as boring as a bowl of oatmeal. (John Grogan)

Why can’t I make it to work today? Because my German Shepherd needs me! (Unknown)

Why can’t I make it to work today? Because my German Shepherd needs me! (Unknown)

I think dogs are the most amazing creatures; they give unconditional love. For me, they are the role model for being alive. (Gilda Radner)

My German Shepherd can run 40 yards in 4 seconds. Want to try your luck? (Gina Ries)