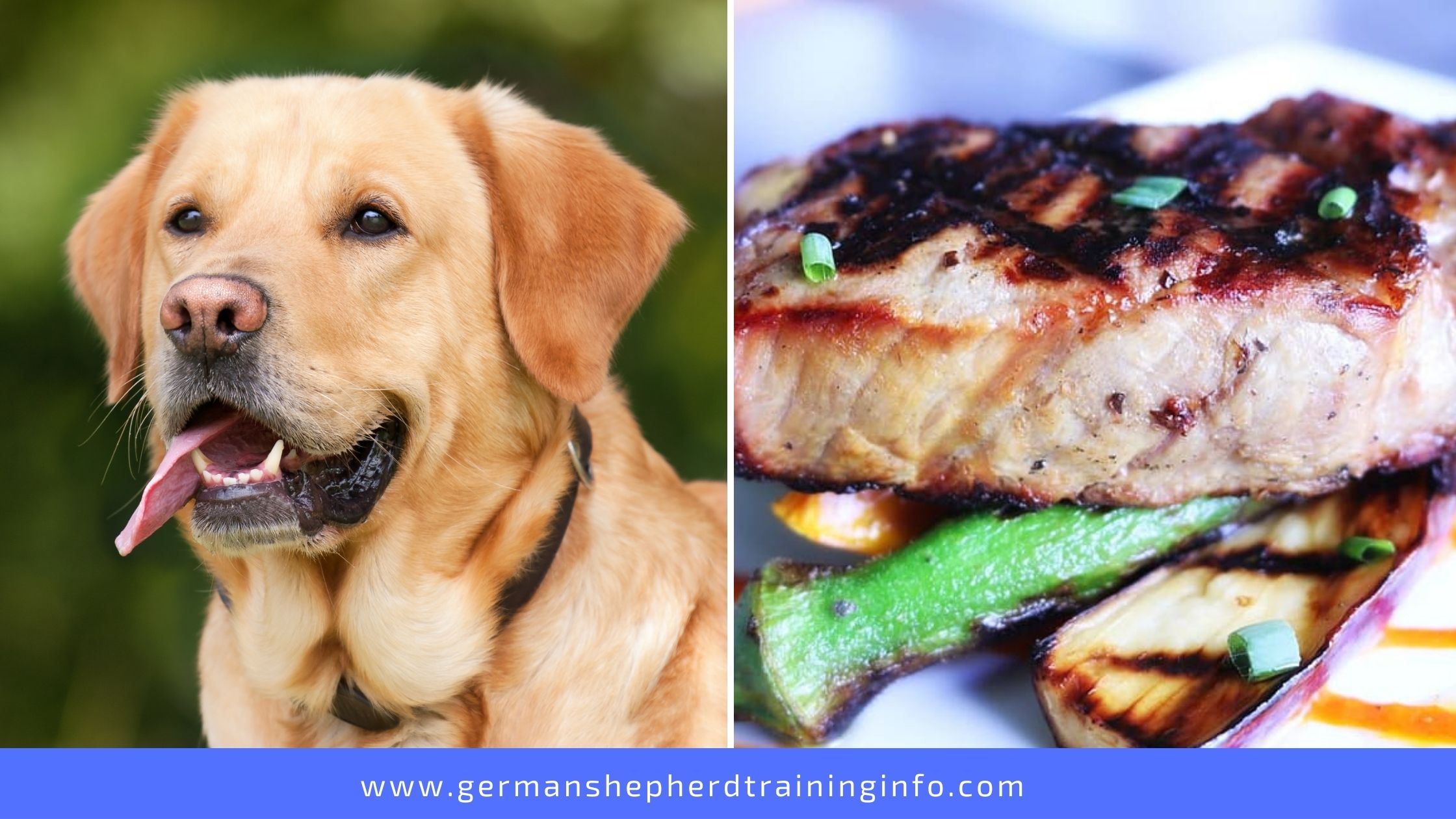 Unless they are really into it because you have tuna steaks in your meals all the time. In which case, you can treat them with a really, really small amount once in a blue moon.

Everybody does like a tuna steak in their barbeque grill once in a while. However, haven’t we learned already that the rules of gourmet pleasure for humans do not always extend to their canine companions? Tuna steak is one such food fetish dogs cannot afford to have.

Wait, Tuna steaks are supposed to be healthy, are not they?

It is true that Tuna steaks are rich in Omega-3 fatty acids and proteins and low in fats. Proteins found in Tuna also work better for dogs with sensitive stomachs that cannot process proteins from other poultry sources.

Also, many dog foods that are commercially available may contain tuna in some form.

Then, what is the problem with tuna steaks?

In a perfect world, our water bodies would have had clean, non-industrial waters where fishes will be in bountiful abundance, not to mention non-toxic.

However, the reality remains that the industrial wastes are drained into water bodies. This has resulted in mercury contamination in aquatic life, which can be transferred through dietary sources.

Why is mercury contamination by tuna a greater threat for dogs?

Not digging the tuna steak much now, are you?? Mercury contamination is a possibility for humans too. However, it also depends on the weight of the individuals.

Human beings can still handle their tuna due to more average body weight statistics. This also implies that the smaller the dog, the more he is susceptible to mercury poisoning by over-feeding on tuna steaks.

How do I know my dog has been mercury poisoned?

It is unlikely that your dog will suffer from mercury poisoning if he had a bite of your leftover tuna steak. However, let’s imagine a scenario where you bought all those tuna steak cans on a bumper sale and somehow your dog got access to them.

The symptoms can range from vomiting blood, loss of coordination, tremors, and watery diarrhea to permanent kidney damage and blindness. If you notice any of the symptoms or even the above-mentioned fiasco; it is best to rush your dog to the vet immediately.

Why all the attention on Tuna?

A valid question, considering there are other fishes in the water bodies and menu list too.

Mercury contamination is aggravated by the number of years in the life span of the fish as well as its size. Tuna, considering the circumstances in reference, is a comparatively larger fish that also happens to live a long fish life. This makes it more likely to have higher mercury levels.

And it also increases your chances of getting mercury in your body along with the fine taste of well-grilled tuna if you binge on the steaks.

READ :   How Do Police Train Their German Shepherds: A few insider notes on the K9

Check the Can Specifications

It is one of the very few food items we recommend you buy as canned. This is because the tuna content in the cans is usually carefully measured according to the possibility of mercury levels in them.

We are all for fresh and healthy home-cooked food, but you don’t have to take this to your ego. Did you know there are about twenty different types of tuna fish, but usually only five among them are served in human and canine meals?

Also, skipjack is the tuna variety that has the lowest mercury poisoning per serving? No? Better to trust the canned food experts in this matter then.

You can go for tuna cans that are labeled as containing ‘low mercury levels. Also, go for ‘No added salt’ labels as tuna is a saltwater fish. It thus already contains high sodium levels and hence excessive intake can also lead to salt poisoning.

Another tip would be to avoid feeding your dog raw tuna steaks as they may be contaminated with bacteria and other parasites.

While tuna is a healthy fish food item on its own, the nutrients available in it can be accumulated from other dog-appropriate foods as well. Mercury poisoning, on the other hand, is an unwelcomed guest that is best avoided, even if you have upset your dog’s taste buds in this case.

And while we are out there delivering the bad news, have a look at how Pecan pie isn’t the best bet for your dog (or you) either. All we are saying is: don’t shoot the messenger!

READ :   Pet Corrector Vs Compressed Air: Is There Any Difference At All?