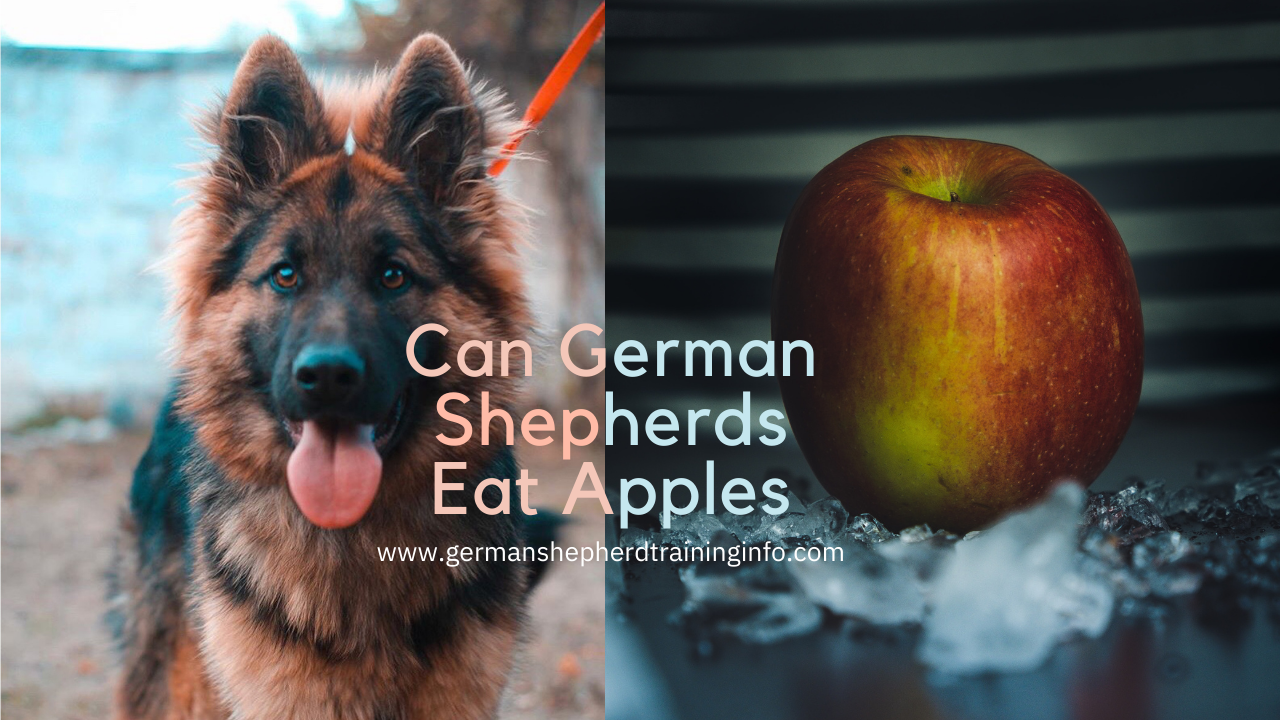 An apple a day keeps the doctor away, but can the same be said for the vet away as well? We understand that Apple is one of the most popular fruit, and probably you are excited for your dog to taste it as well. But wondering whether it is safe enough to feed your German Shepherd an Apple?

Yes, German Shepherd can eat apples. Apple gets a clear pass considering it is full of antioxidants. Due to its high polyphenols as dietary fibers, apples are good for the dog’s gut health, and an added bonus, it comes jam-packed with Vitamin A and Vitamin C.

Apple is a healthy snack, and if your dog is on a calorie count, it substitutes as a low-calorie snack with calcium, phosphorus, and many essential minerals. One medium-sized apple has only 95 calories.

A crisp, juicy Apple will not only satisfy the sweet tooth of your foodie German Shepherd but will also be a great mouth freshener for your dog.

A habit of munching Apples will provide your canine buddy with shiny fur and good skin. Omega 3 and Omega 6 in Apple will make your German Shepherd looking commercial ready. And an added bonus, you won’t have to worry about your German Shepherd health if it steals a piece or two from your plate. It can be a good bonding session between you and your canine buddy while sharing an apple in halfsies.

What should be the serving size of an Apple?

Although Apples are an affordable and relatively healthy snack, moderation is the key while serving a portion to your German Shepherd. A slice or two from your breakfast plate is enough portion for your canine buddy.

Also, it is crucial to make sure that Apple does not come with a pit or skin. It can be fatal or create certain conditions for the dog if the portion size is too big.

Which part of the Apple is servable?

The Apple can be dissected in three parts:

Apple’s peel and flesh both have polyphenols, which cause the antioxidant effect. The Apple skin does have a wax coating and can be induced with pesticides, but it must be noted that Apple’s skin has 4.4 grams of total fiber. The Apple skin has almost 77% of insoluble fiber, which is good for gut health.

Also, it is important to note that an apple is enriched with high antioxidants and Vitamin C just under the peel of Apple. If your dog is sensitive, it is preferable to peel off the skin. If not, it might not cause any extra trouble for your dog’s gut health.

A study from Cornell University in 2007, shows that in apple skin, there is a compound found called triterpenoids. The superpower of this compound is it helps in reducing cancerous cells. The extra boost of antioxidants from the skin of Apple can reduce the chance of cancer.

Apple’s flesh is the best part that can be fed to the dog without giving it any second thought. We are already very well acquainted with the minerals in the Apple. It also contains carbohydrates and sugar. We recommend it best to consult your vet before cutting an apple for your German Shepherd and the portion size. Moderation must be maintained as it can cause bellyache or diarrhea as well. While feeding, it is essential to keep an eye on their feed so that they do not swallow it as it may contribute to intestinal blockage.

German Shepherd, who is suffering from some kind of illness or are under some restrictions in terms of their protein consumption and are on low-calorie diets, can devour an Apple as a substitution.

Apple seeds are found to have cyanide, which is a toxic substance. It is important to remove the core and the seeds, and the Apple stem before serving it to your dog. Apple seeds also contain amygdalin. This can cause harm to your German Shepherd and also can be a potential threat if the quantity is higher.

READ :   German Shepherd vs Caucasian Shepherd: The Battle of the Cuddling Beasts

Your canine buddy can have high blood sugar or can be diabetic. So we highly recommend consulting with the vet before making any dietary changes.

What would happen if your German Shepherd has swallowed the seeds?

It can be extremely dangerous if your German Shepherd has swallowed the seed of an Apple. One Apple seed contains 0.45 milligrams of Cyanide. If they have swallowed a sensible amount, it won’t harm much, but if it gets out of hand, it is recommended to rush to the vet. The vet will probably flush out the toxins via vomiting.

What are the preparations that need to be done before feeding your German Shepherd an Apple?

As tempting as it may sound to just throw an apple towards your dog, without making any effort, it can invite some unwanted trouble to your dog’s health. To avoid those, you need to follow specific steps before giving your dog this low-calorie treat. These steps are significant and cannot be skipped.

Following these specific steps will ensure that your buddy can enjoy the treat without any concern or threat.

Can German Shepherd have green apples?

READ :   Different Types of Shepherd Dogs You Should be Aware of

Also, they are not a huge fan of a sour taste. This is the reason you see those videos on YouTube for other social media where the dog spits out the lemon. The sour taste does not tickle their pallet. Although, if you want, you can feed some Green apples to your dog in moderation.

What symptoms should be considered in case of an emergency?

Certain symptoms need to be monitored and acted upon immediately. These symptoms may show up after accidentally chomping on some seed or as a side effect. In such cases, it is recommended to visit the vet immediately.

These symptoms are extremely important and can be fatal if not given attention.

Can you serve apple in any recipe to your German Shepherd?

Apples can be served as a part of any recipe for your German Shepherd. As long as you do the portion cutting efficiently, it is a good way of feeding your dog.

You can serve apples in the form of an apple pie. You just need to make sure that there are no additional sweeteners added. It is also recommended to avoid artificial flavor as well.

Apples can be an excellent source of minerals and antioxidants. But just like the other fruits, it must be served in moderation to make the best low- calorie treat that your dog will enjoy without any health hazards. Understanding your dog’s needs and body is important, and as a family member, your German Shephard’s life depends on you. We recommend making a proper diet chart for your dog, consulting your vet, and following it accordingly. This would impart better control over their meal and allow you to slide in some treats for your best friend.