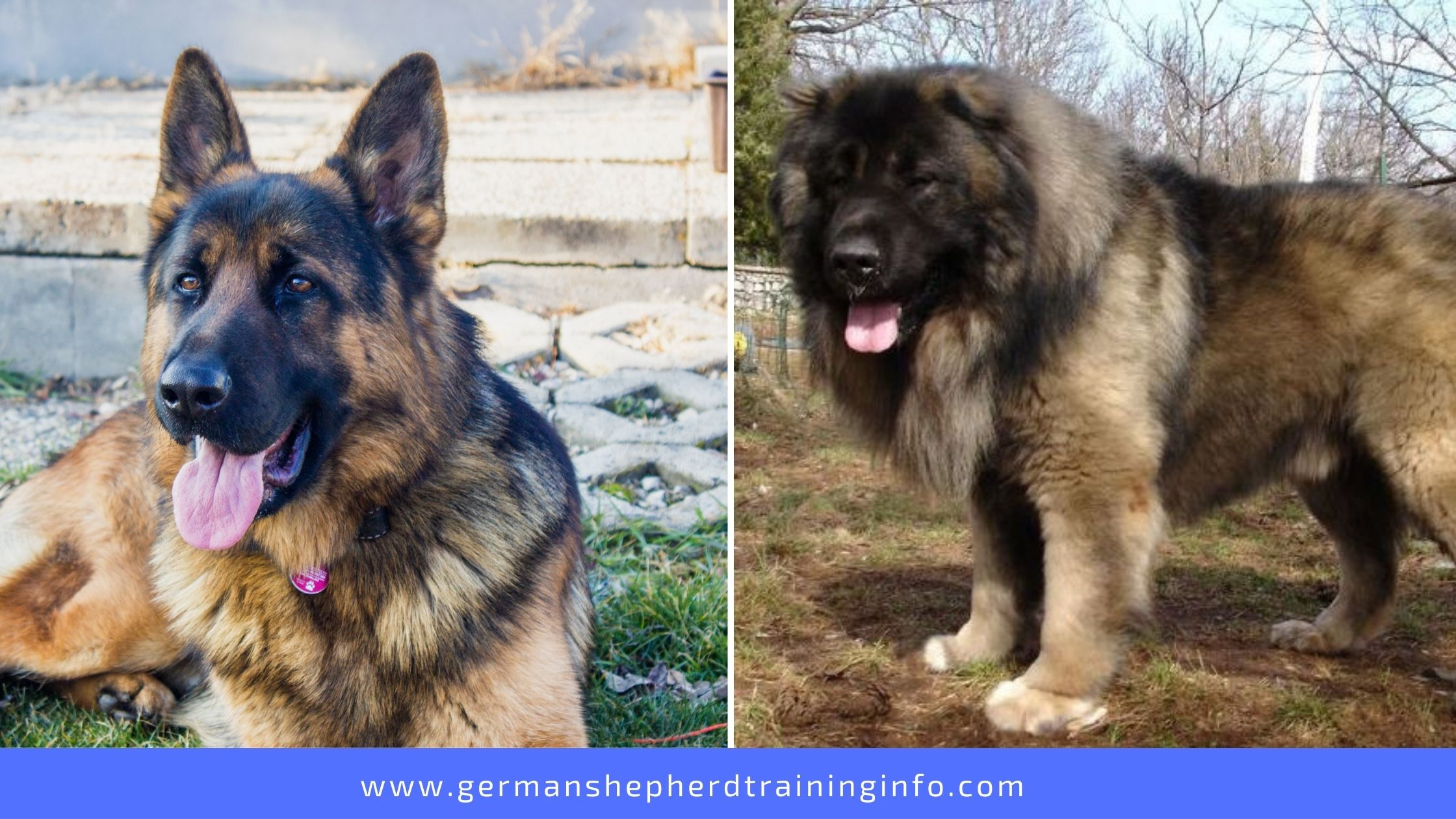 Everyone is well acquainted with German shepherds and if anyone comes across a puppy it will surely make you go weak in your knees. However, there is another kind of shepherd breed those are equally adoring, lovable, and protective. Caucasian shepherds although not many know about them, can still be a dog lover’s ultimate resort.

With its origin from the Caucasian mountains in Russia, this breed of shepherd dog will be your perfect snuggle toy provided you have space at your place. While one breed is attainable, the other surpasses other features. This article compares both breeds based on some features that will help you come to a fruitful decision.

On the contrary, German shepherds are much lighter. A male GSD weighs approximately 30-40 kgs while the females weigh 24-32 kgs. Moreover, in comparison to GSDs, the Caucasians are much taller and measure about 65-72cm, while the GSDs measures about 55-61 cm.

Caucasian shepherds’ genes showcase their alpha nature and that’s why training difficulty for this breed can be moderate to tough. And needless to mention because large sizes making training them even more difficult. However, once they are trained Caucasians are obedient.

German Shepherds, on the other hand, possess lesser alpha characteristics than the Caucasians and thus training is pretty easy. GSDs are comparatively easy to train, however, training the German shepherds during the heart can be really difficult.

German shepherds are, however, easily adaptable as long as they are trained properly. Moreover, first-timers or novices must avoid Caucasian shepherds, and handling such huge dogs initially can be quite daunting. German shepherds with a little bit of training are quite adaptable. Although they remain and territorial, with time they accept guests at your place.

Caucasians have a strong sense of territoriality and are thus very much sensitive to any changes or new people lurking in the house. Thus, such changes can lead to an increased level of barking that showcases their displeasures.

Contrarily, German shepherds are also very territorial and along with these loves to follow a routine. They are very much sensitive to any changes in routine or are very reluctant to blend in unknowns. However, it must be noted that GSDs exhibit lesser degrees of barking than Caucasians.

Although both being shepherding breeds, there remain some levels of differences in their temperament. Caucasian shepherds are affectionate, loyal, loving, independent, courageous, alert, territorial, protective, and maybe stubborn.

German shepherds along with being territorial, are loveable, loyal, intelligent, outgoing, protective, and so on. However, it is noted that the German shepherds show an edge over the Caucasians in being friendly. Moreover, if you have other pets in the house, it is more likely that GSDs become more receptible and acceptable than Caucasian shepherds.

Dogs along with being protecting the house ought to be playful that allows for constant companionship. Out of these two shepherd dogs, the Caucasian shepherd secures a slight edge over the German shepherds. They are very active and also require a lot of exercising and physical activities making them playful.

German shepherds are slightly less playful and partially couch potatoes as compared to Caucasian shepherds. They too require exercising for keeping their physical activities at an optimal point. However, in both cases, if you are new dog parents or there are children or babies in the house, before playing, dogs must be checked for any discrepancies in the house.

In case of maintenance, it includes washing, brushing, or in any other form to keeps the appearance and also physical health of these dogs at an optimal condition. In the case of Caucasian, these dogs must be brushed at regular intervals such that it gets rid of any other extra of undercoat.

Bathing must also be not done daily as they are heavily coated and water takes ages to dry up. Thus, it can be stated that the Caucasians required moderate levels of maintenance. However, the Caucasians shed quite a bit and thus maintenance costs may go high.

German shepherds are also constant shedders and bathing, and nail cutting or any other forms of grooming are known to be low maintenance. Usually, the German shepherds require brushing 3 to 4 times a week, and bathing regularly is not recommended for them as well.

READ :   A Quick Guide to Heat Tolerance in German Shepherds

This part is a bit tricky to conclude as each of these breeds is of more or less of the same qualities. However, based aggressiveness, trainability, or any other factor related to the above-mentioned factors holds a nudge favor for German shepherds. Although, if you want to get Caucasian support, first you need to assess your internal living conditions and availability of space before getting one.