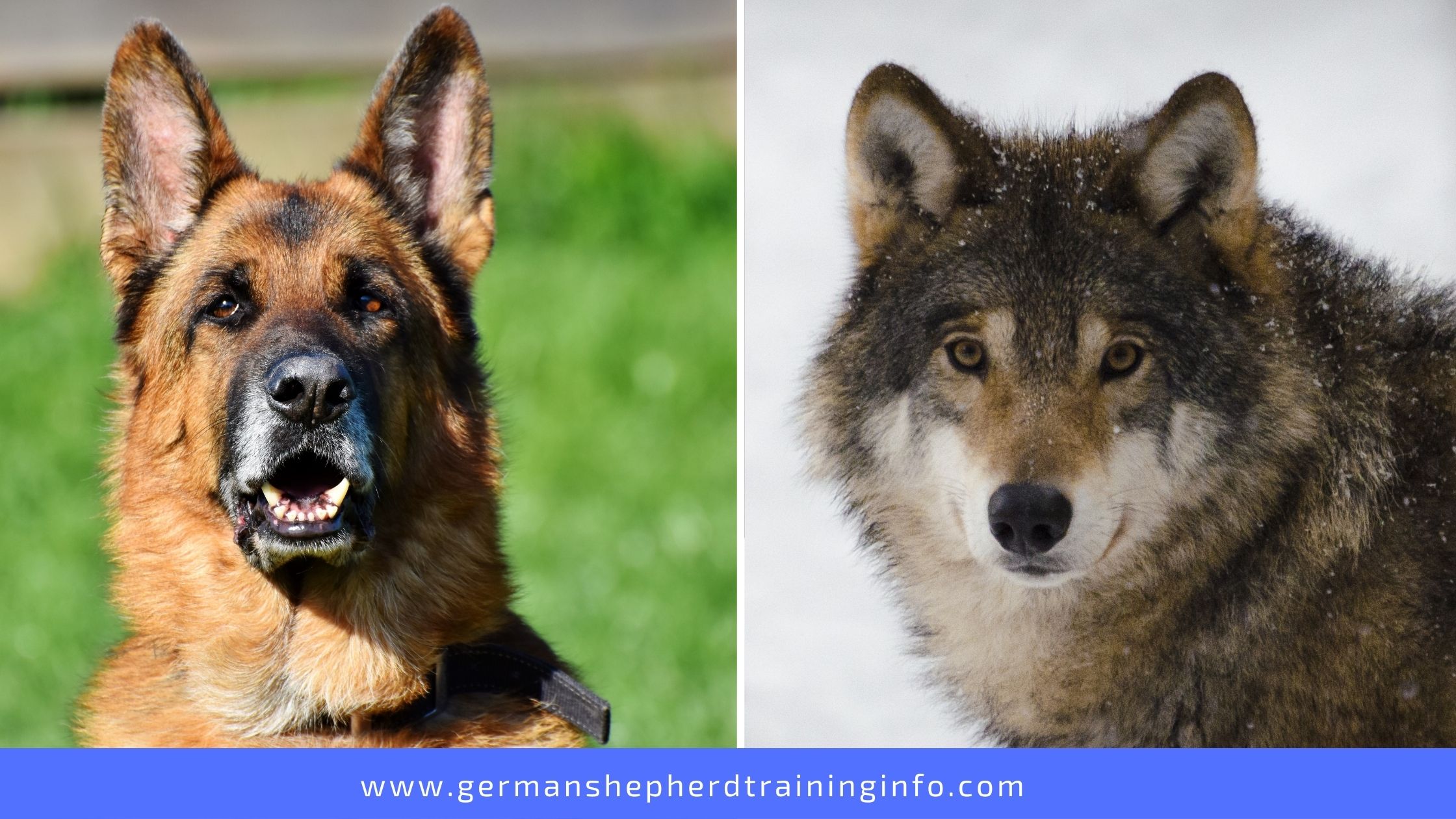 For dog fans who like to put one breed against the other, the ultimate combat that probably has a potboiler to die for is the one between a German shepherd and a wolf.

Both of them have physical similarities and it is often suggested that a German shepherd shares lineage with wolves. This seems to imply that they have descended from wolves, since the wolves have been around much longer.

The German shepherds were called Alsatians in UK and Ireland, in the aftermath of the first world war as it was believed that its popularity in the west may affected by association with this nationality. The name remains popular in UK to this day.

Sharing a common animal family does bless both of them with many commonalities. However there is a divergence in their attributes in a multitude of ways.

The vital statistics with respect to the physical parameters are tilted in the favor of wolves in practically all aspects.

The proudest and the largest of German shepherd male can only narrowly register a victory with the smallest female among the wolves. The wolves can weigh from 51 to 180 pounds.  Compare it with a German shepherd, who tails behind at 49 to 88pounds.

According to the statistics provided by the Integrated Taxonomic Integration System, the wolves with their three species stand tall within the range of 2.2 feet to 2.7 feet. The German shepherd on the other hand, stands at 22 inches to 2.2 feet.

Yes, they both do have freakish similarity. However a canine expert with a keen eye can easily tell them apart with these few careful details.

For example: The eyes of a German shepherd usually come in different shades of brown. On the other hand, wolves have quite a variety of colors to offer with respect to their eyes. They can range from shades of grey, black and brown to a more vibrant yellow, amber and blue-green.

To throw in an amazing factoid for canine lovers, all dogs and wolves are born with blue eyes. But it changes to their actual color in a few months!!

READ :   Belgian Malinois Vs Doberman: Clash between the bonhomous laddie and the devoted defender

Also wolves have straighter tails and bigger paws than German shepherds, probably to allow them to run faster in order to survive in the wild.

That is probably the reason that their coats are mostly of colors which allow them to camouflage with their surroundings. German shepherds on the other hand can afford the luxury of having a wider range of colors when it comes to their coats. They can range from all black, silver, blue to red black and tan black varieties.

However, wolf fur insulates the animal better in the harsh, cold winters than the fur coat on the dog.

However, in the dog world, it is not the way you look or the pounds you weigh, but the strength with which you bite that matters the most.

An average dog bites with the force of 230-250 psi (pounds per square inch). The German shepherd makes us proud by being in the higher end of the range at 238 psi .

Wolves usually have an average speed of 75 Kph while our German shepherd chases at the speed of 63 Kph.

The hind legs of wolves are also stronger than German shepherds. No prizes for guessing who wins the race here.

German shepherds mostly have the ability to breed twice a year while the breeding cycle of wolves is confined to once a year.

The offspring of wolves also mature faster and are on their four feet sooner than the German shepherd puppies.  Pups born in early summer are ready to participate in hunting expeditions by autumn. This is, again, probably because they have to be quick to adapt to the dangers in the wild, while shepherd puppies can find a sense of security with their human companions.

When it comes to interaction with the humans, all the areas that the German shepherd lags behind the wolf add up to provide him a lead here. The wolf here is the shy and nerdy adolescent that would rather hang out only with his pack.

The wolves also have a strict hierarchy in their packs, so there is not much possibility of any individualistic aspiration of a lone wolf for human companionship being fulfilled. In any case, the wolves’ natural displeasure at human presence has found biological evidence in their increased cortisol levels as a reaction.

Even a well behaved wolf cannot be trusted with behaving in a predictable manner, even after years of specialized training. Hence, it might not be possible to eliminate their basic instincts even after human training. It is thus generally a bad idea to keep wolves as pets, not to mention the huge cost it entails in ensuring training for them with specialized trainers.

READ :   Are Cauliflower Leaves Safe For Your Dogs? Can Dogs Eat It?

Also, just to add with a cautionary note, a person is much more likely to be fatally wound by his wolf pet than a dog.

The German shepherd dogs, on the other hand, are fond of human beings. This allows them to be domesticated. And this is the reason, other than their size and strength, that they have found a job in our police force and other security set ups to provide protection and surveillance to their human friends.

To elaborate further, because of their desire for human companionship, German shepherds end up being a great asset in a variety of professions.

Apart from the aforementioned security services, German shepherds are great actors on screen. They also act as excellent pupils to their trainers because they are genetically smart (share many chromosomes with the wolves) and willing to learn. In fact, they are so good; they end up playing the wolves themselves. Not to ruin all the onscreen wolves’ movies you find fascinating, that might be your friendly German shepherd-next-door playing the mean and nasty wolf.

The wolves on the other hand, are lousy actors. Have all the inbuilt ferociousness in them, but absolutely no interest in shining on the silver screen.

German shepherds, unlike wolves, as we know are domesticated and bred in a controlled environment. In fact, selective breeding is also done to get crouched hind legs to mimic wolf hind legs in German shepherds. Due to this, they tend to suffer from poor gait in the hind legs and have been criticized in a BBC documentary as a “half-dog, half–frog” pedigree.

This, coupled with inbreeding, often results in aggravation of certain genetic defects in shepherd dogs. The most common among these are ‘hip dysplasia’.

Wolves on the other hand, are not the kind that will allow you to mess up their genetic pool, and hence, hip dysplasia among them is much fewer in number and usually associated only with arthritis.

The wolves have acclimatized their bodies over the centuries to tolerate all kinds of weather extremes, be it nails biting cold or unbearable heat. They can thus be found as easily in the tundra, as in a desert. To add to it, the traditional ‘wolf wisdom of survival’ is also handed down by the senior members of their packs to their junior wolves.

The wolves also have the ability to stomach almost anything, although they do prefer meat. This ups their survivability factor by multiple notches.

The German shepherds are on the other hand are domesticated dogs and just like us humans, have less inclination to bear the extremities of weather. Also, their digestive mechanism differs from wolves, so it is easier for them to digest some human foods than meat.

The American Kennel Club estimates that the German shepherds are the second most popular breed of dogs. It is sufficient to assume by this statement that such huge is their number, that it is nearly impossible to deduce an accurate estimation of their population.

Sadly, the picture is not so rosy for wolf friends. It is believed that roughly only 300,000 survive globally. Although they are not in danger of extinction yet, the number is dwindling with every passing day. This is partly because they have been a victim of hunting to quench human lust for entertainment and accessorizing.

Just to clear the air for once and all, it is extremely unlikely that a German shepherd can win a duel against a wolf. Wolves have the physical build-up to overpower most of the dogs. They also live in the wild and have sharper reflexes than the domesticated German shepherds.

However, close to the human habitations, wolves that move in smaller packs may find themselves endangered by a large group of dogs that may have been trained by the indigenous human population.

In fact, certain dogs are specifically built to counter wolves, in areas where they prove to be somewhat a menace. Karnal is one such dog breed that possesses an unusually thick coat to protect them from a wolf bite.

The interest among dog lovers with regard to comparisons between the shepherd dog and the wolf probably dates a long time back. The German shepherd has grown to be loved as a member of human community as well honored for the sense of security it provides. The wolf, on the other hand, is revered for the elusive charm it exudes. It is also often visualized as howling on a mysterious full moon night, thanks to our motion pictures, as well as Harry Potter (Remember Remus Lupin).

Although there have been some recent attempts at inbreeding between the German shepherds and the Wolves, largely the dichotomy still very much remains. While the German shepherd as a domesticated dog has grown to be of valuable service to humanity at large as well as a beloved pet, the wolves as the predators of the wild have played their role well in maintaining the ecological balance desired by nature.