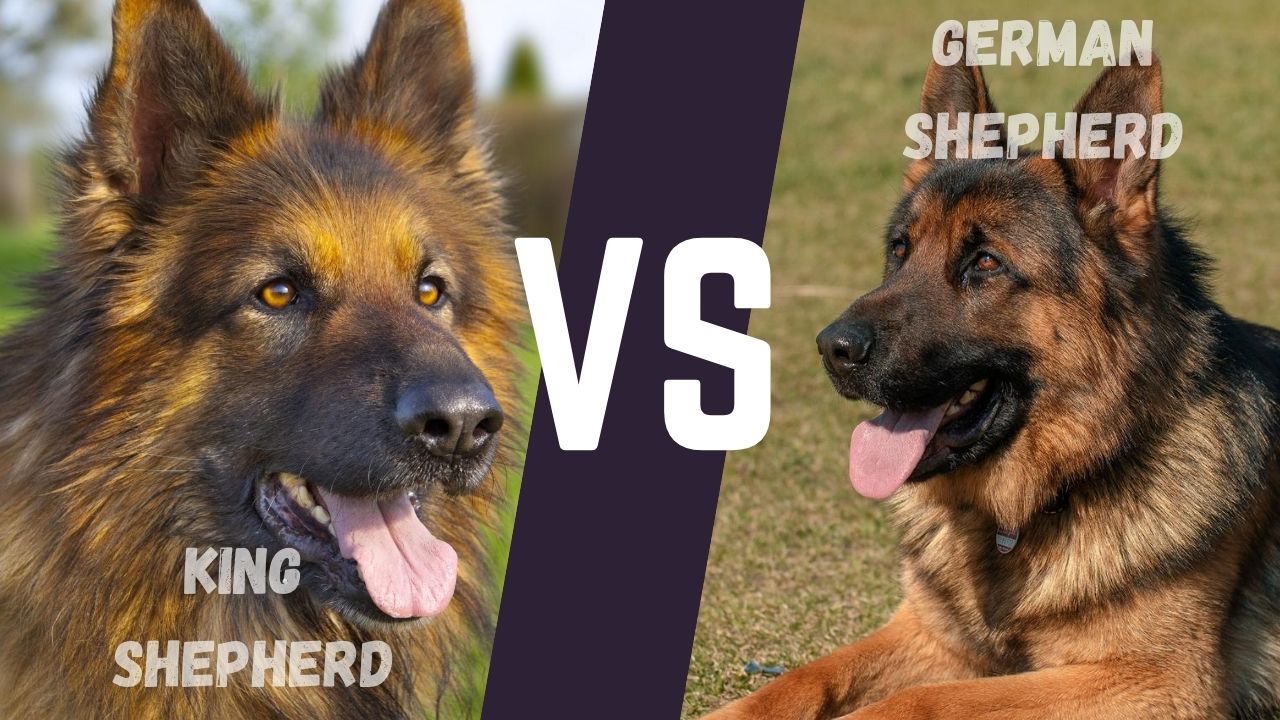 One very common point of debate among the german shepherd lovers and owners is how characteristics of the breed resemble a lot to other breeds. Some of these include Belgian Maliosis (Some even mistakenly call it ‘Belgian Shepherd’), Shiloh Shepherd, Dutch Shepherd, Northern Inuit Dog, and sometimes wolf-dog as well.

There is however one breed which makes it literally impossible for a newbie to distinguish it from our beloved german shepherd. These are….King Shepherds. Its very hard to find a difference between two breeds just by looking at it. You got to experience it by living with them.

We are writing this post to give you an insight into how both these amazing breeds differ in their origin, physical appearance including size comparison & coat and temperament.

King Shepherd is the breed of Shepherd dog that falls into the biggest category. It is basically a crossbreed that has originated from a German Shepherd and the Shiloh Shepherd in their composition. Also, King Shepherd is a huge dog breed at about 25 to 31 inches tall, and they weigh between 75 to 150 pounds.

This breed, King Shepherd, was originally bred from American and European German Shepherds, Alaskan Malamutes, and the eminent Pyrenees. Their breeding was started in the early 1990s, nonetheless, an authorized breed club was established in 1995. No other breed embodies the saying, dogs are man’s best friend, more than the German Shepherd hybrid, King Shepherd.

On the other hand, the German Shepherd Dog breed is a large-sized dog that emanated in Germany in the year 1899. German Shepherds are mainly working dogs, evolved originally for herding and guarding sheep. Their strength, intelligence, and skills in obedience training are always utilized in police and military departments around the world.

READ :   5 German Shepherd skills & traits you must be aware of

As the name suggests, King Shepherds are king in size as well. They are a fusion of many breeds but mostly German Shepherd. These guys are highly intelligent, obedient, and dutiful towards their owners. Some of the highlights of their physical appearance are:

The original German Shepherds are slightly different looking from their other breed, King Shepherds. These species appear as:

Both King Shepherd & German Shepherd are great and justify the term of being Man’s best friend. As you already read, how King Shepherds are with their owners, they are loyal, obedient, and intelligent. These guys are also versatile. Their playful nature & ability to perform various tasks makes them the perfect companion of a human being.

King Shepherds can live in an apartment as long as you let them do plenty of exercises and stretch their legs. They will get pretty large, if they are living in an apartment, make sure your house has a big yard. This might be a more suitable setting for your dog.

German Shepherds are not so different from kings. But they are definitely a bit more aggressive (if owner doesn’t exactly know how to keep them) and suitable for police work. These guys are versatile and do their job efficiently in police or military departments as guide dogs. They are the best breed for herding. They are very fond of their master and have unconditional love if treated the right way. They too are big in size, hence give them space to move and play. They can be your best friend for life in every situation.

READ :   German Shepherd vs Wolf: The differences between the dog in domesticity and the wolf in the wilderness

The comparison between them depends on many things, behavior is one of them. Different people have different needs from their dogs. Although these two breeds share many similar traits, they have slightly different characters.

Also, it is best to offer them some training & tricky exercises. Both of them possess heavy IQs, and their minds are always active. Along with their playful nature, both of these are highly competitive dog breeds.

They make outstanding family pets but can similarly be trained for many tasks, comprising herding, police work, or as a guide or service dog. King Shepherds are very defensive of their households and families. They are not shy, usually a bit more civil to strangers than German Shepherds.

On the other end, German Shepherds are widely acknowledged for their guarding attitude towards their homes and families, often known as intelligent, devoted dogs. Nevertheless, they can be hostile with strangers, and they may furthermore be aggressive towards other dogs if they assume them as a threat to their habitat.

King Shepherds are a rare breed that closely resembles German Shepherds. They are a mixing breed, loyal in nature, and protective of their family. King Shepherds aren’t greatly recognized by the American Kennel Club, but their huge size makes them stand out among their close relatives, such as Shepherds and herding dogs. As their name suggests, King Shepherds are gigantic shepherd hybrids. Evolving from the cross-breeding of German and Shiloh Shepherds.

READ :   Can Dogs Eat Oatmeal With Brown Sugar And Cinnamon? – Is This Power-Packed Carbohydrate Meal Good For Your Dog?

German Shepherds were originally cultivated from the herding dogs of middle and southern Germany. Standardized breeding commenced once the first breed federation was founded in 1889, with the purpose of eliciting an athletic, versatile, high-achieving working dog. They are known to be the protective dogs of their masters.

It is because of their nature, both of the dog breeds are suitable as pets. King Shepherd is more likely to be friendly than German Shepherd, but both of them can be trained & protect their family from any danger. If you are thinking of getting one of them, wait no longer!